Armies On Parade: The Iron Tenth 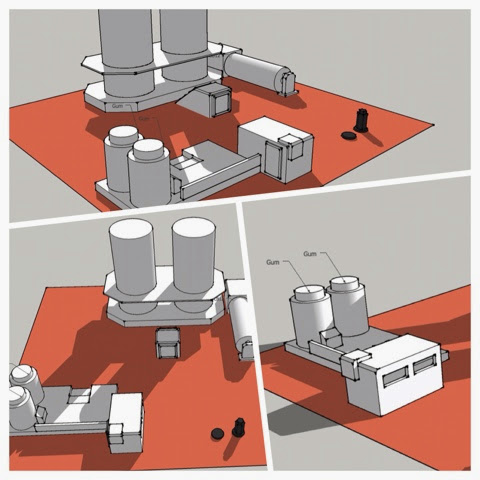 So I went into my local GW recently, to ask if there was any painting competitions coming up soon. I've only entered one before but it was a fun day, some serious talent about! Anyway, all they have on the horizon is Armies On Parade. Perfect! It's just the kick in the arse I need to get a bit of productive hobbying done. I have until the 23rd of October to get together a 2x2 board ready with whatever models on it I like. I'm going to use my Iron Hands, using this deadline to polish off a few things, figure out how to paint the tank, maybe add another character. Also, and in many ways even more important for me, is a bit of pressure and focus on actually building terrain. After two posts here showing off other blogs doing it the right way with stunning boards, it's time to get the proverbial finger out. I've been collecting bits for potential terrain for ages, bottles, containers interesting looking thingys, and now I get to use them. I measured a few of the pieces up and made rough 3D models of them to make a plan of the board. Here's where I got to. Now all I have to do is make it all... 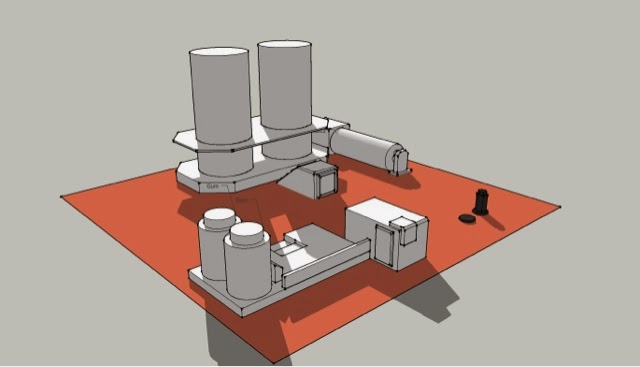 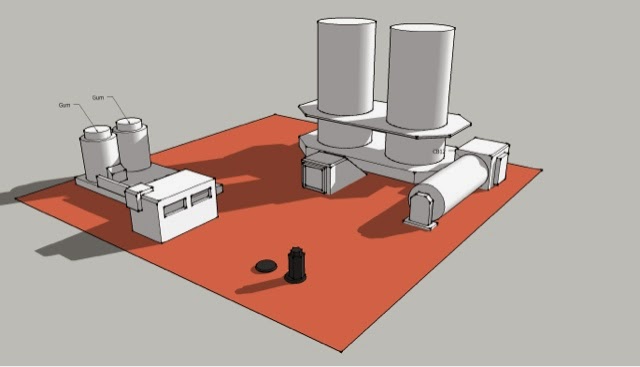 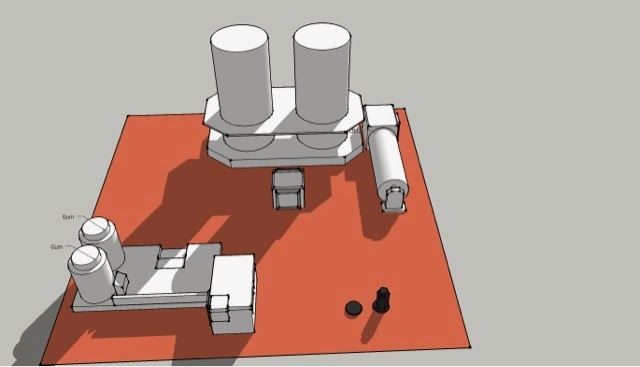 Today, after a lot of inactivity, I was compelled to write this post after seeing basically the coolest thing in the community since my previous shout out to the Painting Bunker a few months back.

Check out this amazing post on Legion of Plastic... actually, just check out the whole blog! 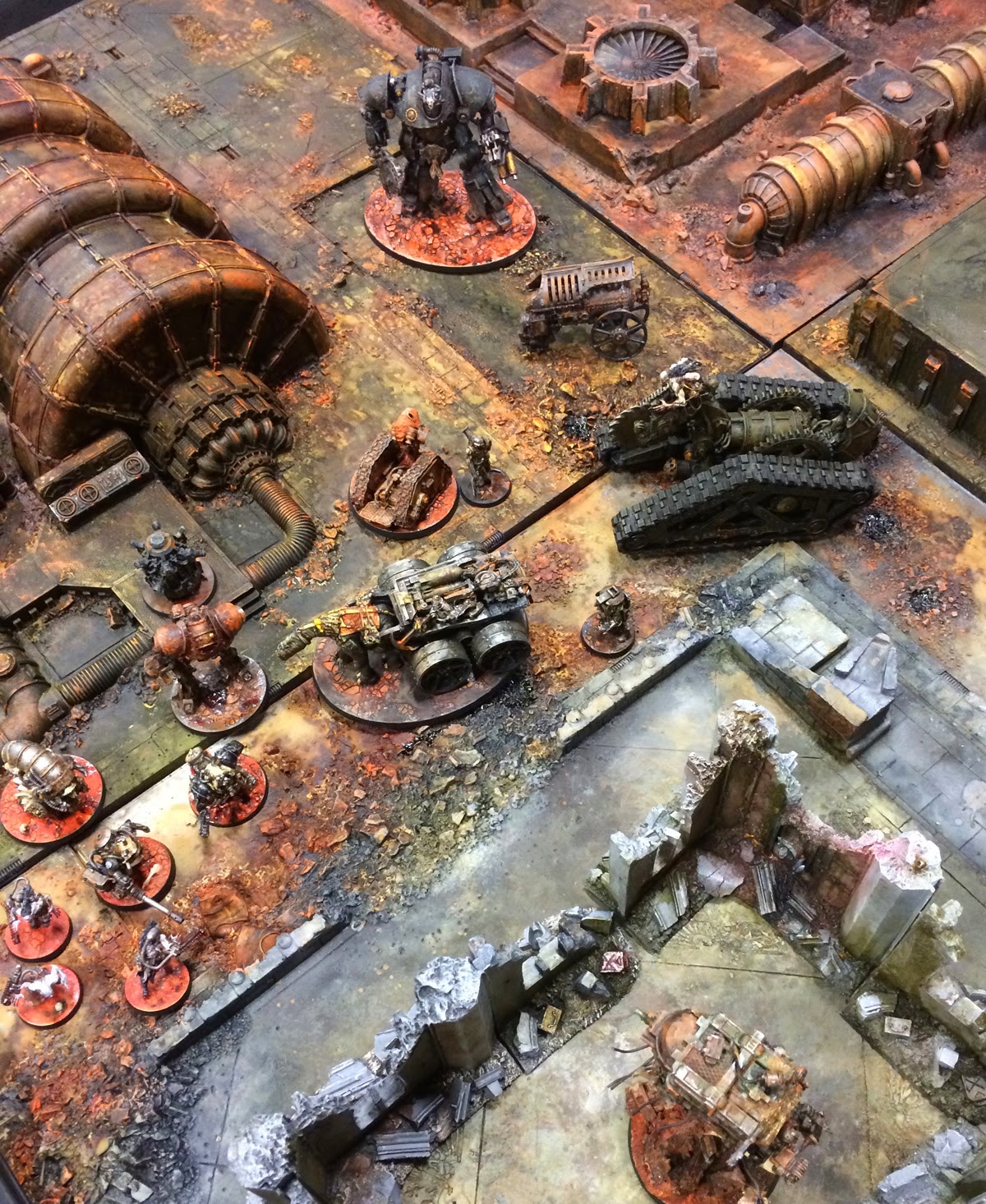 It's incredible, and as far as I'm concerned, another example of *exactly* what the hobby is all about, and what I think more people should pay attention too. Once in a while, stop doing the math-hammer, put away the calculator and working out MEQs, and just make some killer models to have fun with.

I wish I had a bit more time to dedicate to this kind of thing - hopefully I will over the coming months, but for now, go check out Legion of Plastic, and bask in the glory of incredible minis. I'm going to cover how I do my bases for my Iron Hands. I'm using a Mars-esque style, and I'm going to take you through how I achieve the effect. In this example, I'm showing on my new Iron Father, which is a sightly special case as I've an extra display element, but the technique is the same as normal.


First up, I mark out in bright paint around where the feet will be, this is because I  don't want to get any material in here that will interfere with gluing the model to the base. Next, I start adding the basing materials. In this case, I have a load of plasticard tiles I made for another project, and I basically chop these up to make them look shattered. Old bits of sprue are also goldmines, so I cut these up to at interesting angles as well, representing pipes maybe or some other type of debris. Also - servo skull for good measure! Next up, adding the sand/gravel. This is basically to add texture in between all the other stuff. Here I've used some model railway material - perfect for this and cheep! Comes in all sizes and styles too. The trick here, I find, is to cover most of the original, plain black base, and overlap you other materials a bit. It makes it all a bit more natural, not just stuff stacked one on top of the other. Also at this point, I sometimes add Typhus Corrosion and Agrellan Earth here and then, just for further texture. Okay, so now we're ready for paint. First up, simple black spray to prime it, and seal in all of the bits of grit and gravel. Next up is the main colour for the rust - Deathclaw brown. I find 2 - 3 light, thin coats gets this done about right. Sometimes it's a bit patchy, but I use this as extra detail and texture to the piece. Also, a bit of Leadbelcher on the pieces of sprue I used for piping, or whatever look like it should be metal! After this, a bit of Typhus Corrosion, with a bit of water, just for a light, dirty, gritty wash of the gravel do help to darken the crevasses and pick out the details. After that, the Ryza Rust drybrush. Just need to go a bit heavy on the area's at the edges to make stuff stand out. Finally, and soooo important, is painting the edge of the bases. Personally, I like black. I think for this style it works best, but other like to go grey, brown whatever. As far as I'm concerned, the key for this is it just needs to be neat and consistant! It makes such a difference, rather than being covered with rogue brush strokes and pain splashes. So here we have my the final model, full painted and based. Hope you found the tutorial helpful, any questions, comments or criticisms are welcomed and encouraged! This is a quick post and introduction to a new site I'm going to be contributing to - Heretic Approved. This is a new site aimed at the beginners and people new to our hobby. It's going to combine series  of painting and modelling articles, lore pieces on the various factions from the 40k universe, as well as general tips, tricks and pitfalls to avoid for first timers.

I've been roped in to help with some of the painting annd moddling side of things, and so far I've covered priming, base colour painting and edge highlighting. Some of the lore articles up there are great, and hilarious.  I love Scraps4Bitz terrain article too, I'm going to be embarking on something similar to these in the summer so this will be a great source for inspiration and help!

So check it out, have a browse around and drop a few comments too while you're at it.

Finally back with some models finished! This is my second tactical squad I've done for my Iron Hands, and they will be the Second Tactical Squad of Clan Sorrgol. These guys are another kitbash extravaganza! Tactical, sternguard, various Forge World kits and I'm sure a few other bitz from the box. I need to revisit these guys, and all the others, to apply the clan markings, that will be a pain...  I took photos of the basing process too, but they turned out dreadful, so I've be trying that again on my next model - another Iron Father.

So lets look at a few more pics.


Went with a heavy bolter for a change... believe it or not I think it's the first time I've ever painted one! Anyway, hope you like them.

Blogs I keep an eye on